In the 1970s, MIM was considered a new technology that came out of the air, but whether it is truly popular  it must be tested by the market. As is well known, MIM technology has not been knocked down by other technologies. As time passed by, in 2019, MIM has stabilized and is based on the metal small parts market of comsumer electronic products, medical impant component, as we as orthondontics, in the EU, MIM has been used in automotive, especially Germany, while in the USA, they are good at making MIM firearms parts and bring their plant to Brazil.

In the era of 1970, MIM was considered a new technology that came out of the air, but whether it is truly popular With popularity, it must be baptized and tested by the market. As is well known, MIM technology has not been knocked down by other technologies. As time passed, in 2019, MIM has stabilized and is based on the metal small parts market of 3C products. Look back and see what powerful MIM processes are available to MIM.

As shown in Figure 4.1, using the annual production demand of the product as an objective target for technical evaluation

The horizontal axis is represented by shape complexity (simple, medium, complex) and the vertical axis is based on annual demand, and it is obvious that MIM technology occupies large areas. 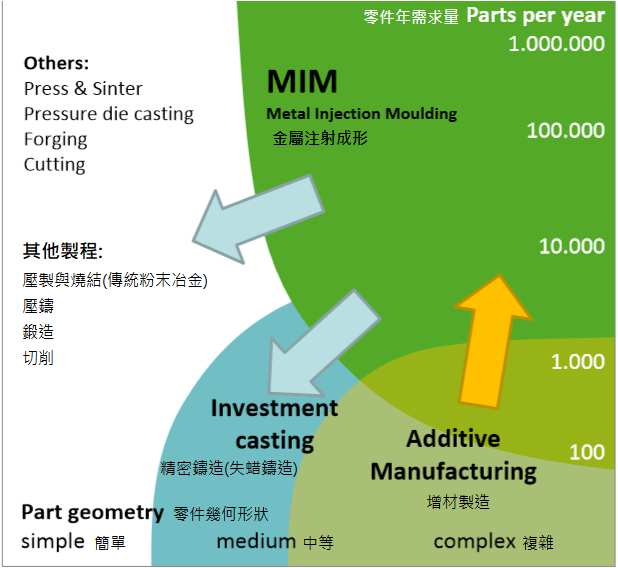 Figure 4.2 is used as a comprehensive comparison of other processes and MIM, the higher the score, the more advantageous, but the overall cost, surface roughness and dimensional accuracy are higher scores, which means the lower the value. We can find MIM's unfavorable projects – twist and size Products that are heavier, and have a lower density (some products must have a porous or closed hollow structure). 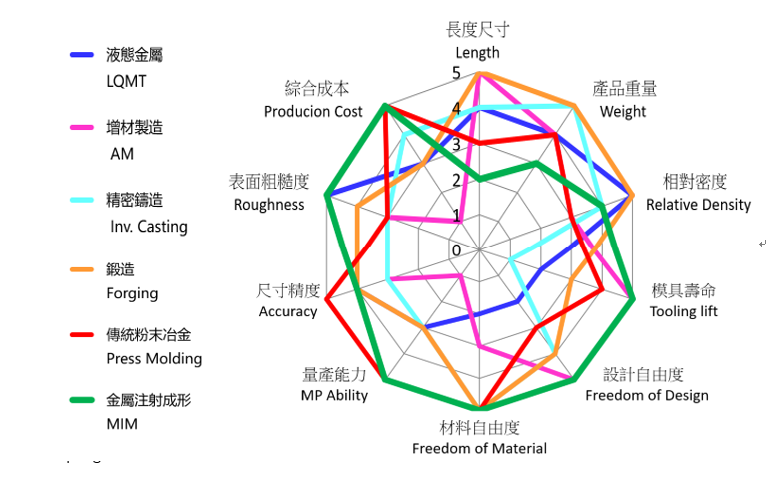 MIM's evaluations in the metal process are excellent, and 6 of the 10 projects we evaluated are full marks.

This is why the trend of MIM technology has been rising in the past decade, and the characteristics of difficult metal processing have evolved in MIM.

People, materials, machines, and laws are gradually becoming easier to complete. Compared with the 1970s, half a century ago, MIM is undoubtedly has contributed a lot to human progress.

The above competitive process is aimed at how to quickly and efficiently obtain Uni-body parts, why is it so important? The integrated design of parts is not the first concept proposed by Apple in the United States.

Through the transmission and implementation, human wisdom can be shared and spread around;

Under the cleanliness and biomedical requirements, the integrated parts are seamless and free from accidental breeding and risks;

In fact, the concept of integration in human civilization is evident in the engraving process, and then progresses to tools, but can really

Instead of killing humans, MIM and other metal molding processes are all driven by this new thinking.

Earlier in 10 years, the liquid alloy of gold and silicon was published in 1960 as the earliest documentary record. At that time, it can be realized by using a metal melt splatter method to make a thin ribbon, so that only a sufficient cooling rate can be obtained.

Metal-free formation from liquid to solid forms a crystalline structure, mainly because the composition is not yet comprehensive, just like a superconductor

(Superconductor) is moving closer to room temperature. LQMT needs to move toward thicker raw materials. In the early 1990s, at the National Aeronautics and Space Administration, NASA, produced by the California Institute of Technology. This major discovery, this is the first man-made amorphous alloy, the cooling rate at that time was only tens of degrees, today's technology and material combinations have provided substantial improvements, as shown in Figure 4.3, liquid metal thickness increases and composition changes related. Figure 4.3 Constantly discovering new components so that the size of the liquid metal can be made larger

4.2.1.2 Detailed comparison between LQMT and MIM

At present, LQMT has been able to smoothly use Die Casting forming technology to reduce the amount of die casting required for each die.

The LQMT is pre-manufactured into a quantitative size ingot, each time the ingot is fed into a vacuum melting chamber (950~1300 °C), depending on the liquid

Depending on the metal composition, the raw material ingot is heated to the eutectic melting and then injected into the metal mold under pressure (about 850~880 °C)

Curing and forming, after the demoulding, the blank needs to be cut by a high-pressure water jet and a small amount of numerical cutting is performed to ensure the correct shape and rule.

Inch. Figure 4.5 shows the latest equipment from LQMT. Although 50 years have passed, the two processes of LQMT and MIM have been in the competitive phase, the table below shows the differences between the two processes in more detail. By the way, under the war of patent layout,

From the early US/Singapore/Korea/China four-nation battle until 2017, the US sold the LQMT patent to China's Yi'an Technology also officially announced that LQMT has been handed over to China for assistance in promotion

The other processes will be compared with MIM in our next coming series..

Any high-end technical competition must finally go out of the laboratory to face the market, two similar technical wars are already very clearly distinguished between winning and losing, small items are absolutely leading MIM, LQMT is suitable for large size and non-magnetic requirements, We are looking forward to LQMT's technology complementing MIM, and even the updated liquid metal components are made into powders that will be available to be used by MIM process